William T. Proudfoot (1860-1928) was born near Indianola, and learned carpentry from his father.[2]
In 1878, he graduated from high school and he worked for a Des Moines architect until 1882. In 1882-1883, he joined with George W. Bird to provide designs for buildings in South Dakota. In 1884, he attended one semester at the Massachusetts Institute of Technology, and then he moved to Wichita, Kansas, and George Bird joined him in practice there. By 1891, the two had moved to Salt Lake City, and practiced as Monheim, Bird & Proudfoot. In 1896, Proudfoot and Bird returned to practice in Des Moines. In 1904, Proudfoot joined the Iowa Chapter of the American Institute of Architects. In 1898, the University of Iowa chose Proudfoot and Bird’s building design for Schaeffer Hall, and in 1900, their design for Marston Hall was chosen by Iowa State in Ames. Also at this time, their design for the Polk County Courthouse in Des Moines was chosen, which cemented their position as major architects in the state.[3] In 1910, Harry Rawson joined the firm, and their production increased substantially. In 1913, George Bird retired and moved to California. Proudfoot died in 1928, although the firm continued to utilize his name until 1945.

George W. Bird (1854-1953) was born in New Jersey, and he was apparently trained through the apprenticeship system.[4] By 1882, Bird was in Des Moines, and he had a design for a house published in the national architectural journal, American Architect. By 1884, he was working as a draftsman for the firm of Foster & Liebbe, and he worked for them until 1885, although he also was working with Proudfoot on the buildings in South Dakota. From 1885-1900, Bird was working with Proudfoot in Wichita, followed by a move to Salt Lake City where they practiced as Monheim, Bird & Proudfoot. In 1896, Bird and Proudfoot returned to Des Moines, and in 1904, Bird joined the Iowa Chapter of the American Institute of Architects. Bird served as the designer for the firm until he retired to California in 1913, and he died in Los Angeles.

Harry D. Rawson (1873-1934) was born in Des Moines.[5] He attended Grinnell College for two years, and in 1896, he graduated from Massachusetts Institute of Technology (MIT). After his graduation, he worked for two years in Chicago, and in 1898, he formed the partnership with George E. Hallett, as Hallett & Rawson, which lasted until 1910. In 1904, Rawson joined the Iowa Chapter of the American institute of Architects, and in 1927, he served a term as president. In 1910, Rawson joined the firm of Proudfoot, Bird & Rawson. By 1932, the firm had become Proudfoot, Rawson, Brooks & Borg, the predecessor of the current firm Brooks, Borg, & Skiles.

(Click on these images to learn more about the libraries. Scroll down for the Architectural Blueprints and Information tab.) 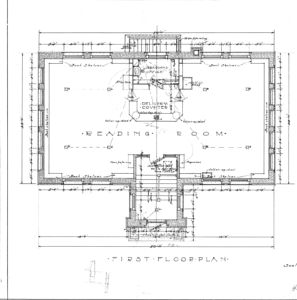 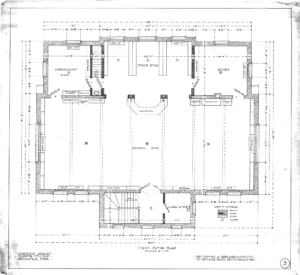 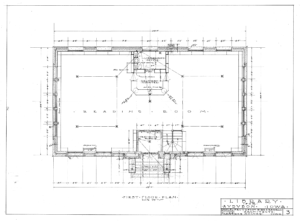