Theâ€¯Raney familyâ€¯is notable for its involvement in the early history of the Marengo Public Library.  Mrs. M.A (Francisca) Raney (1856-1931) was a member of the women’s social club known as the Ingleside Club which was instrumental in garnering support for the establishment of the public library.[1]  She later went on to be the town’s ninth librarian.[2]  Her husband, Mr. M.A. Raney, met Andrew Carnegie in Washington, DC in 1903 to discuss the possibility of Marengo receiving a grant from Carnegie to build a public library in Marengo.[3]  Following the town election in which the citizens of Marengo overwhelmingly voted in favor of acceptingâ€¯the Carnegie grant, M.A. Raney was elected first president of the library board.[4]

Francisca Raney,â€¯nÃ©eâ€¯McManigal, was born on November 21, 1856 in Pennsylvania to Franklinâ€¯McManigalâ€¯(1825-1880)[5] and Margaret,â€¯nÃ©eâ€¯McKibben (1830-1872).[6]  The Raneys of Marengo lived on Bridge Street and had three children together.[7]  Francisca Raney was involved in supporting education in her community.  In a Marengo Republican article from January of 1908, she is reported to have participated on a panel with the Marengo High School director and two teachers where such things as the rural course of study handbook for Iowa Teachers were discussed.[8]

[3] M.A. Raney was the owner of The Marengo Republican newspaper at the time of the Marengo Public Library’s founding.

[4] In later years, a relative of Mr. and Mrs. Raney also named R.A. Raney would go on to hold the position of board president. 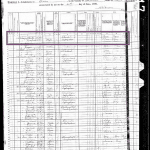 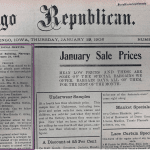