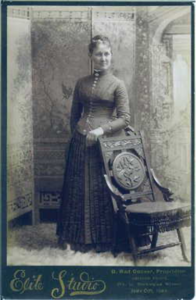 Josephine Tomlinson Hollingsworth was appointed to fill a vacancy on the Library Board of Trustees in 1905 when Mr. Hughes relocated to Burlington. She previously had been a member of the People’s Library Association and actively campaigned for West Liberty to have a public library. She was elected the Board Secretary in May,1905 and held this position for sixteen years. Due to ill health, she resigned as secretary in November,1921 but remained a board member until her death in March,1922. [1]

Josephine was born July 18,1848 at Beallsville, PA, the daughter of Carver and Mary Ann Tomlinson. The family moved to Putnam Co., IL in 1852. [2]  After reaching maturity she was a teacher in the local schools. [3]  She married Mahlon Hollingsworth in 1886 and joined him at his farm home near West Liberty, Iowa. This was her husband’s second marriage; the couple had no children. [4]  After their farm home burned in 1888, they built a home on Calhoun St. in West Liberty where they spent the rest of their lives. [5]  Mr. Hollingsworth passed away in February,1901. [6]

Mrs. Hollingsworth led an active role in her community.  She became a charter member of the Floriculture Society in 1896 and through her encouragement, the Society was a continuous supporter of the library. As a Quaker, she conducted final services for members of her faith when the local Friends’ church disbanded.  She was described as having a “gracious and gentle manner”, beloved by all. [7]  She died March 6, 1922, from cardiovascular disease [8] and is buried at North Prairie Cemetery near West Liberty. [9]