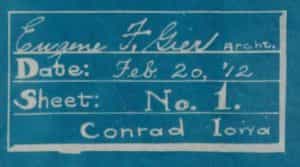 Eugene F. Gier (1890-1978) was born in Conrad, Iowa.[1] By January 1912, he and his father, John Gier, both from Beaman, another small town in Grundy County, were referenced in relationship to the architectural plans for the Grundy Center Library.[2] In 1918, Eugene Gier was listed on the Conrad Honor Roll of the Masonic Lodge as one of the seven enlisted men from Roman Lodge, no. 564.[3]

Gier was apparently the third architect who submitted plans to James Bertram, Andrew Carnegie’s secretary, for the Grundy Center Library. The community had received their grant letter for $6,000 dated April 8, 1910.[4] By October 1910, the community had plans drawn up by the Waterloo, Iowa, architect, J.G. Ralston.[5] However, the bid for Ralston’s plans came in too high, and Bertram was not willing to raise the grant amount. By August 1911, the community had engaged a second architect, John Morrell, from Clinton, Iowa, who also submitted a set of plans for the library building, but these were not accepted by the Library Board.[6] On January 11, 1912, Gier’s plans were sent to Bertram for approval, and by the end of the month, Bertram had accepted them, although he suggested that “The bilding [sic] would be much improved if two or three of the steps in the interior of the bilding [sic] were eliminated and added to the steps outside, so as to giv [sic] a larger delivery room.” On February 4, 1913, Gier sent a letter to the Carnegie Corporation asking for the $300 architect’s fee.

Gier’s successful design for the Grundy Center Library provided the community with a substantial but inexpensive brick building. Gier apparently utilized Bertram’s “Notes on the Erection of Library Bildings” [sic], which had been sent to the community in January of 1911, although his basement plan was more efficient; Gier deleted the extra corridor to access the Assembly room.[7] It should be noted that Gier’s window placement on the basement level corresponded to the needs of the various rooms, which was not a symmetrical placement on the exterior. Gier’s exterior design for the building referenced the Italian Renaissance style that had first appeared in Iowa for the design of the Cedar Rapids Library. The dominate feature was the heavy cornice, the horizontal molding below the parapet, which helped to conceal the roof. The small pedimented porch that rested on brackets was a later change from the view of the building that was published in February of 1912.[8]
-SL Stuart

(Click on this image to learn more about the library. Scroll down for the Architectural Blueprints and Information tab.) 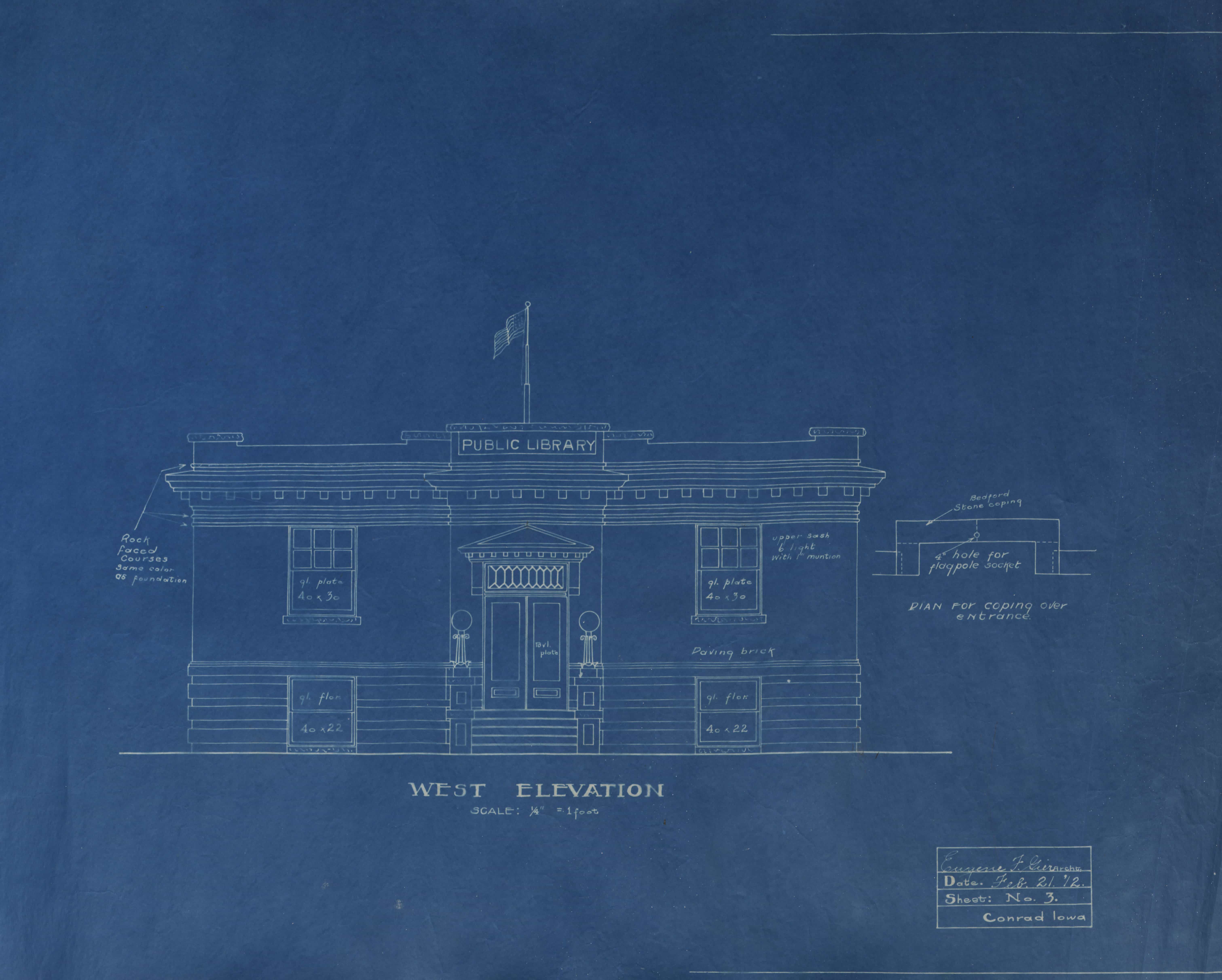