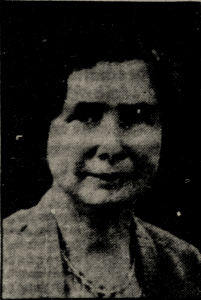 She was born in 1877 in Marengo, to parents Josephus Crenshaw and Laura Cadawaller.[5]  Ms. Crenshaw attended not only Coe College, and the University of Iowa, but also the University at Columbia in New York.[6]  Ms. Crenshaw returned to Marengo, and for over 35 years, she served as a teacher and subsequently as the Principal of the Marengo High School.  In 1942, Miss Crenshaw helped charter a program for adults to get their high school diploma.[7]  She passed away in 1943 in Marengo, and is buried IOOF Cemetery in Marengo. 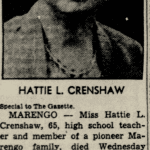