Signature of Architect Howard B. Burr

Howard Bowman Burr (1885-1964) was born in Waverly, Iowa, but he was sent to an academy at Upper Iowa University in Fayette to complete his high school education.[1] He attended Iowa State College for one year, with courses in mechanical engineering. Burr subsequently moved to Waterloo in 1907, and worked first with architect Clinton P. Shockley, a graduate of the Armour Institute of Technology in Chicago.[2] By 1910, Burr had begun his career as an architect, primarily designing homes in Waterloo, Grundy Center, and Osage; a church in Waterloo; several commercial buildings, and schools in Mitchell (1916), Floyd (1916), Butler (1917), Fayette (1918), Grundy (1919), Tama (1920), and Bremer (1925) counties. By the 1930s, Burr was apparently no longer working as an architect, and he later died in Denver, Co.

By the summer of 1916, Burr had received the commission for the Reinbeck Public Library.[3] On September 15, 1916, Thomas E. Johnson, the primary correspondent for Reinbeck, sent the plans to Carnegie’s secretary, James Bertram. On September 19, Bertram responded that the “plans would not do,” and that “little attention had been given” to the memorandum on library buildings that Bertram had sent with the original letter. (Beginning in 1911, all of Bertram’s grant letters included a pamphlet “Notes on the Erection of Library Bildings” [sic] with six basic floor plans as a guide to the communities that received a grant letter.) On October 4th revised plans were sent from Reinbeck, and by Oct. 9th, Bertram had rejected the plans yet again as he was unhappy with the plan for the basement. A third set of plans were sent to Bertram on Oct. 31st; on November 6th, Bertram responded with more specific criticisms. He noted that the delivery desk was too long, that there didn’t need to be pillar supports on the main floor, that there should be two entrances in the basement, and that the toilets were too large and poorly located. On Nov. 12, the fourth set of plans, which were accepted, were sent with the note by Johnson which said, “I hope Mr. Burr has correctly interpreted your suggestions.”

Burr’s design for the Reinbeck Public Library featured the Prairie style that he had favored for many of the bungalow designs in Waterloo. The roof was a hipped design with deep overhanging eaves. A flanged-arch entrance porch roof was used for the front entrance. While the windows are arched, the Prairie style is also evident in the strong horizontal band around the building created by the change from brick on the basement to the less expensive stucco above. Reinbeck’s Prairie style library building was the third in the state following Onawa (1909 opening), and Woodbine (1910 opening), and it is interesting to note that all three featured arched windows which are not typical of the usual Prairie style. 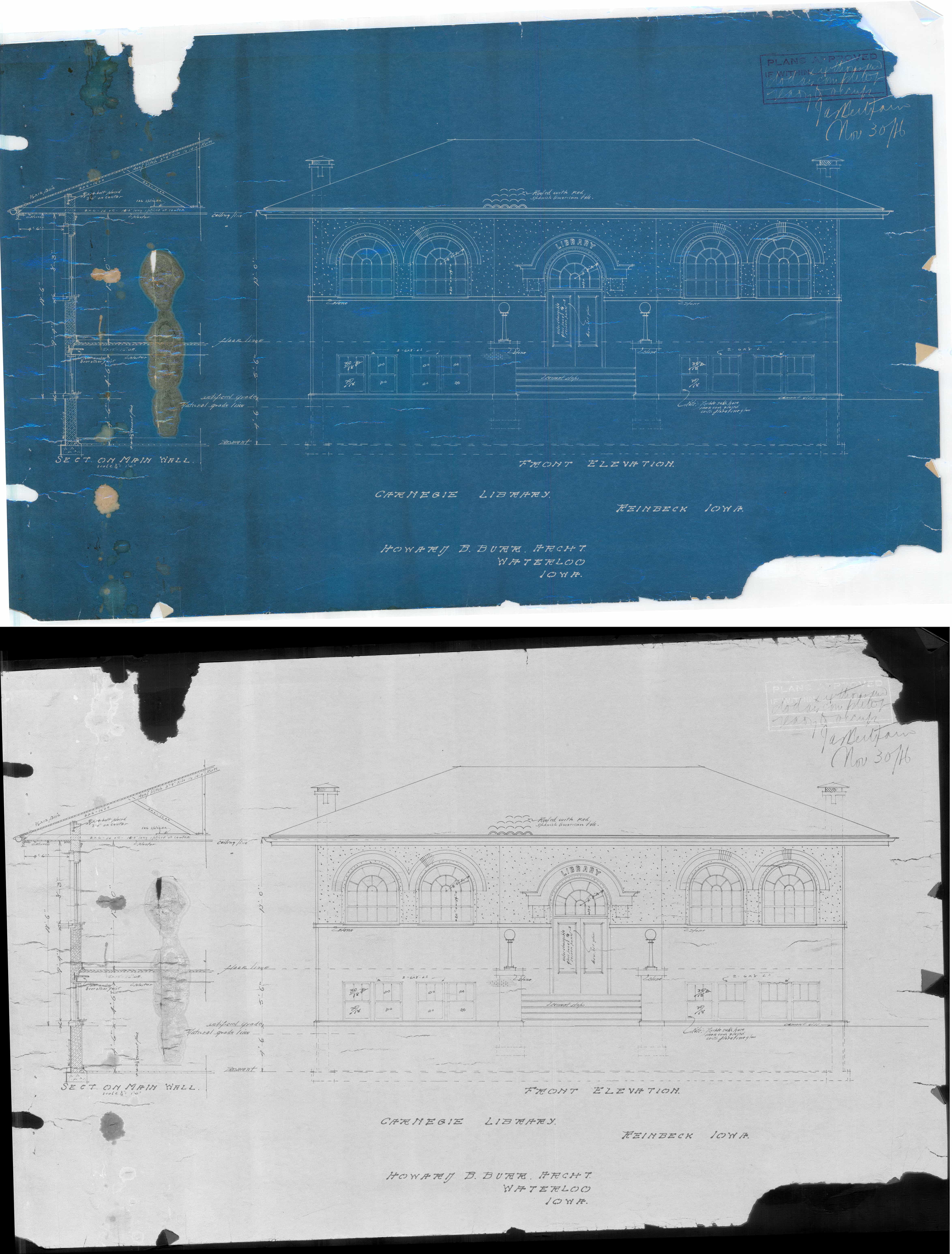