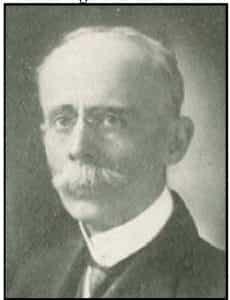 Johnson Brigham had come to Iowa in 1881, and by 1893, he was in Des Moines where he authored the Midland Monthly magazine until 1898.1 The magazine featured local Iowa authors, and in his editorials, Brigham promoted traveling and public libraries.  Brigham was also a supporter of women’s suffrage, and he collaborated with Harriet Towner on a women’s column; later Towner became one of the long-serving members of the Iowa Library Commission.  In 1898, Governor Leslie M. Shaw appointed Brigham to the position of the State Librarian of Iowa, which meant that he then became the chair of the new Iowa Library Commission.  He offered the position of the first Secretary of the Iowa Library Commission to Alice S. Tyler.  In his official capacity, Brigham frequently attended the dedication ceremonies of the newly built libraries around the state, often serving as the keynote speaker.  During his lengthy tenure as the State Librarian, he served as President of the Iowa Library Association in 1903 and 1927.