The firm Beuttler and & Arnold designed the plans for the Sibley (1915) Carnegie library.

William Beuttler (1883-1963) was born in Hannibal, Missouri, and gained architectural and building knowledge from his German-born father between 1900 and 1902.[1] From 1906-1908, he worked for the Chicago, Burlington & Quincy Railroad, and then from 1909-1911 he studied architecture at Washington University in St. Louis. In 1911, he worked for Sioux City architect Wilfred W. Beach, and by 1912, he was practicing with Ralph Arnold, and the firm designed mostly churches and schools in a seven state area. In 1915, Beuttler joined the Iowa Chapter of the American Institute of Architects. Arnold left the firm by 1941; Beuttler later formed a partnership with his son, and continued to practice in Sioux City until his death.

Ralph Arnold (1889-1961) was born in Carbondale, Illinois, and received his degree from the University of Illinois in 1911.[2] By 1911, he was working in Sioux City for Wilfred W. Beach, and in 1912, he entered a partnership with Beuttler. In 1914, he became a member of the American Institute of Architects, and in 1923, he served as president. After the dissolution of their partnership, Arnold moved to Des Moines, and he became the architect for the Iowa State Board of Control.

Sibley, Iowa, received a $10,000 grant from Carnegie in September of 1915.[3] As was customary for grants after 1911, James Bertram, Carnegie’s secretary, sent his brochure, “Notes on the Erection of Library Bildings, [sic]” as an enclosure with all of the grant letters which was to provide guidance for the communities. By February of 1916, the town had engaged the architectural firm Beuttler & Arnold to design the library building, and the first set of plans were sent. On March 6, 1916, Bertram wrote back that the “proposed arrangement wil [sic] not do.” (As in the title of his pamphlet above, Bertram utilized the ‘simplified spelling’ method in his correspondence with communities.) In July, Beuttler & Arnold sent an additional two sets of plans. On August 3, 1916, after having received three sets of Sibley plans which he rejected, Bertram noted that “the shape of the bilding [sic] identifies it with Diagram B,” and he criticized the placement of the interior stairway to the basement, as well as the arrangement of the basement spaces. On August 28, 1916, Bertram subsequently sent another copy of the “Notes.” On Oct. 19th, a set of plans were sent that Bertram generally accepted, although he continued to question the spatial arrangements proposed by the architects: he commented on the librarian’s office, and the space distributions in the basement. Perhaps as an indication of his dissatisfaction with the plans, Bertram made the unusual request that the “authorities and the people of Sibley and Holman Township” indicate their satisfaction with the plans, which occurred by a vote on November 14, 1916. Even in December of 1916, the Sibley correspondent was indicating that changes could still be made to ensure Bertram’s approval. Many of these changes were apparently implemented.

Finally, in a letter dated November 6, 1916, Bertram questioned the arrangement of the librarian’s room, which was located in the center of the building behind the circulation desk.[4] He noted “It is the concensus of opinion that it is better if the librarian’s room is separated from the rest of the main floor simply by moveable bookcases, and if further privacy is necessary, a light partition with glass can extend from the top of the bookcases to the ceiling.” As is clear from the extant floor plan and the early photos, this was the approach ultimately utilized by Beuttler & Arnold.

What is interesting is that Beuttler & Arnold had provided the plans for at least two libraries in Nebraska, both of which had been built before Sibley, so presumably they would have been familiar with the suggested plans from Bertram’s “Notes.”[5] Bloomfield, Nebraska, received their grant for $5,000 in January 1913, and by February 1913, Beuttler & Arnold were engaged, and the building was constructed very quickly. The grant for Hartington, Nebraska, for $8,000 was dated in March 1914. However, both Bloomfield and Hartington in Nebraska were smaller grants and both appeared to have been based on plan “E,” which were much smaller spaces than what was envisioned for Sibley with its larger grant amount. It is also interesting to note that while the grants were supposed to be based on population size, Sibley, with a 1910 population of 1,330 received a higher grant at $10,000 than Hartington with a population of 1,413; Bloomfield in 1910 had a population of 1,264.[6] Also In 1913, Beuttler & Arnold provided the design for a gymnasium for Morningside College, Sioux City, Iowa.[7] 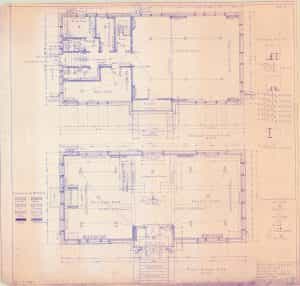